From Despair to A New Home: Artist Robert Padilla Sees the Light
By Gilda Rogers

The montage of faces and bodies in the painting titled, “Them,” by artist, Robert Padilla, depicts life in a manner that many people often ignore, and at times find intrusive. Padilla, with a compassionate eye connects with his subjects and eloquently elevates the homeless with the dignity and grace that every human being deserves. A NEW HOME, is a new show that opens at Detour Gallery in Red Bank on November 30, at 6 pm. Patrons should pause for a moment to grasp the meaning of the expression, “There but for the grace of God go I,” and be humbled by it and to acknowledge it could be you, me or someone we love, whose life has spiraled away from them.

The countless number of people belonging to the homeless subculture often have little to no meaning to the average passerby. However, Padilla was drawn to them, as a creative form of social commentary and self-identification. Like a magnet, the portraits draw you in closer with a sense of bewilderment and guilt and worse disgust! Padilla has vividly delivered unto us – front and center - the disenfranchised, the mentally impaired, the unloved and lonely.

In these exquisite renderings the souls you see and meet are of royalty and refuge, the opposite side of the same humanity. This is the genius of art. It awakens you to a new reality.

A NEW HOME, is that kind of show. Padilla magnificently glorifies all that society deems shameful and bears witness to as part of the human experience. Yes, these are former soldiers, doctors, lawyers, businessmen and women, mothers, fathers, daughters and sons, or YOU and ME, who were changed by an experience.

“Homelessness represented human despair,” said Padilla, a former hairdresser, turned artist. “It was also a premonition of my life. In my mind I had a fear that I would be homeless one day.”
Like so many people, Padilla has had his share of despair. He was born in 1947 in Paris, France, and was shuttled in and out of foster homes and orphanages, which played a factor in him turning his paintbrush on those who had been discarded – out-of-sight-out-of-mind.

Searching for a place to call home, Padilla enlisted in the French military in his early 20’s before coming to the United States in 1976.  With a job already lined up when he arrived, Padilla worked at a ritzy hair salon located on Madison Avenue and 72nd Street in New York City, and was doing well for himself.

While roaming and exploring the streets of New York City and becoming entrenched in his surroundings, Padilla discovered another creative outlet. “I started painting, drawing and developing my technique,” he said. “It took me about a year to create a painting that meant something, and it was a turning point.”

He also saw creating art as his “calling,” once he discovered “Thompson Park, the underground capital of homelessness in New York,” he said. Padilla found in their faces that human emotion, the same cloak of despair that he at times felt.

As an artist, he was validating their existence. They posed for him as models and he expressed seeing a tenderness in their eyes that he connected with. Their faces have been positioned just so on the walls of Detour Gallery in great anticipation of the opening of their show, for all to see and for them to be admired, acknowledged and invited in as part of the human family.
“His work is about real people,” said artist, Julia Rivera, who is also the conservator of the collection. She has meticulously restored a number of pieces in the show. Padilla started his curatorial odyssey with the homeless in the early ‘90s. “His work is the study of the essence of humanity,” said Rivera.

Padilla’s sojourn as an artist has been one of self-discovery to reckon with himself and to see life in a refreshing new way. In 2015, when Kenny Schwartz, the owner of Detour Gallery first saw this great work, Padilla, was battling depression. It was also the same year that Padilla competed in the first of three “Iron Man” triathlons (swim 2.4 miles, 112 miles bicycle ride and run 26 miles), and again in 2016 and 2017.

During this time, Padilla was focused on challenging himself to rise above the confining walls of depression and to free himself from his past. And as fate would have it almost five years later since Schwartz first saw the work, loved it and bought it, Padilla, will see it with a new outlook on life and with new meaning. Detour Gallery has defined itself as a space where raising social consciousness about the important role art plays in transforming lives, is a testament to Padilla’s work and a celebrated homecoming for its new residents. 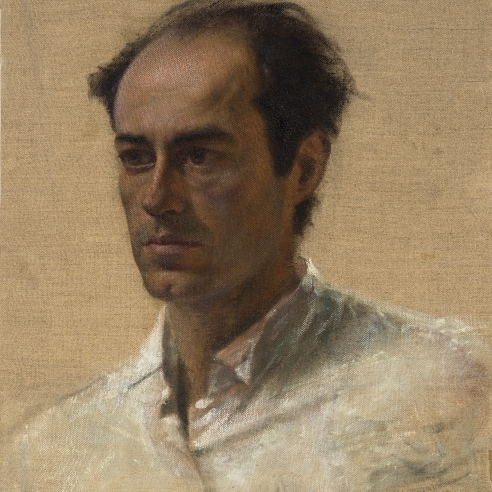