Inquire
Inquire
Inquire
Lately, along with the rise of the #MeToo movement, there have been several news items about the disadvantages of being a woman in Orthodox Judaism. In this branch of Judaism, particularly within Ultra-Orthodoxy, women are often told by the patriarchy how to dress, act, and be. Women are told that they are “separate but equal,” and are admonished for damaging the integrity of their community if they do not follow strict rules of modesty. This proposed art exhibition deals with the systematic bias that has created the invisible women of Orthodox Judaism.

The exhibition was inspired by an article titled “The Invisible Jew” published by Hevria. Written by Merri Ukraincik, the article details her despair at finding that her friend, honored by a gala along with her husband, was left off the invitation. Only her husband’s photograph was shown. As Avital Chizhik-Goldschmidt writes for the Forward, “female presence seems to be disappearing from the Orthodox public space.” Read the article here http://hevria.com/merriukraincik/the-invisible-jew/

During the opening reception a 12 minute dance performance will take place, HOLY/OBJECT, choreographed by Florence Nasar. The piece explores the concept of prayer spaces, mehitza, and woman as the holy/object. Ten dancers move through the questions, looking at the ways in which women's voices, bodies, and presence are affected by ritualized silence, through both external and internalized boundaries.
Download Press Release 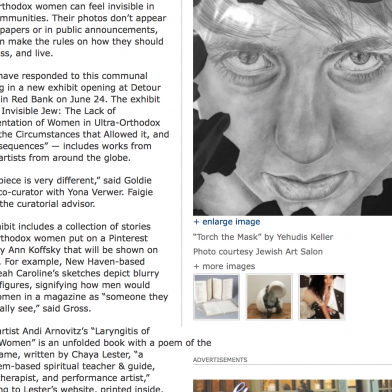